Now that 2018 has passed, I have a full year’s worth of novel data to blab about. Let’s start with the basics.

I’m not going to do a traditional genre split (fantasy, science fiction, adventure, romance, mystery, etc) because that graph isn’t going to look very interesting. Instead, I’m looking at my split between Young Adult (YA)/Middle Grade (MG) and Adult novels. The line between YA and Adult is sometimes hard to determine (Is Mistborn YA? What about The Poppy War?), so I’m going with the genre publishers and authors seem to market the book as, not necessarily my gut feeling. For this spreadsheet, Mistborn is YA, Poppy War is adult.

As a book blogger, I think one important thing to keep in mind when reading is to make sure you’re picking books you enjoy, as well as reviewing for ARCs or author requests. This is a good way to prevent the burn out that happens from reading a whole string of 2- and 3-star books. While I rate with half stars when reviewing, I’m sticking with integer units here, mostly because lazy. Rounding up/down happened at my own discretion. 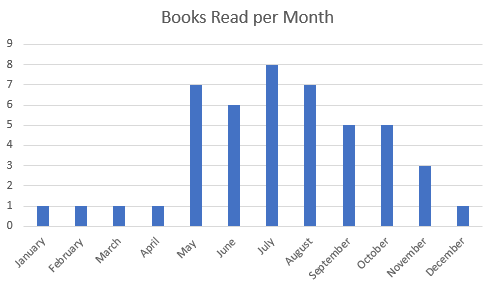 Now for the fun part! Did you know that besides novels, I also aggressively read both web serials and fanfiction? In fact, here are some stats! (Ao3 refers the website ArchiveOfOurOwn.org, fanfiction repository of the internet)

Accounting for all the other works I read, what are my total counts?

Kinda terrifying if you ask me