I was delighted to stumble upon the Asian Readathon on Twitter a couple days ago, which encourages people to read as many books written by Asian authors in the month of May. I wanted to contribute so I’ve put together a list of my favorite books written by Asian authors! I’ve decided to limit this list to one book/author, but by no means does that mean you shouldn’t check out their other books. Definitely check out their other books! 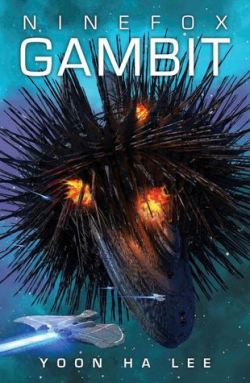 To win an impossible war Captain Kel Cheris must awaken an ancient weapon and a despised traitor general.

Captain Kel Cheris of the hexarchate is disgraced for using unconventional methods in a battle against heretics. Kel Command gives her the opportunity to redeem herself by retaking the Fortress of Scattered Needles, a star fortress that has recently been captured by heretics. Cheris’s career isn’t the only thing at stake. If the fortress falls, the hexarchate itself might be next.

Cheris’s best hope is to ally with the undead tactician Shuos Jedao. The good news is that Jedao has never lost a battle, and he may be the only one who can figure out how to successfully besiege the fortress.

The bad news is that Jedao went mad in his first life and massacred two armies, one of them his own. As the siege wears on, Cheris must decide how far she can trust Jedao–because she might be his next victim.

I adore Yoon Ha Lee’s writing and Ninefox Gambit is probably my favorite. Math-y space lingo, brilliant scheming characters, and some of the craziest worldbuilding (calendar based!) I’ve ever read!

END_OF_DOCUMENT_TOKEN_TO_BE_REPLACED

The /r/Fantasy Bingo is a yearly Bingo hosted on the /r/Fantasy subreddit, created by Lisa from WayTooFantasy. Like the name implies, this is a 25-square book-themed Bingo with each square holding a different challenge. Each author can only be used once and only one square can be a re-read. Learn more about the challenge here. You can check out my past attempts in the /r/Fantasy Bingo page.

My first thoughts for this card were ‘well, that’s not too shabby’. Genre-wise, it’s definitely more aligned with my tastes than last year (certainly less stalker-ish), although I still maintain the 2018 card is superior. Most of these cards would probably cover books I’d likely read over the year anyway, so the only couple I really see myself struggling with are ‘Canadian Author’, ‘Big Dumb Object’, and ‘Magical Pet’. As usual, I never go into these cards planning to sub out a square, so unless April comes around in 2021 and I’ve hit another reading slump, I do plan to get this card done.

While I’ve prepared a ‘first draft’ so to speak of the books I plan to read (with a couple already covered!), the essence of a TBR is to change and so I have no doubts squares will shift and change as the year progresses. END_OF_DOCUMENT_TOKEN_TO_BE_REPLACED