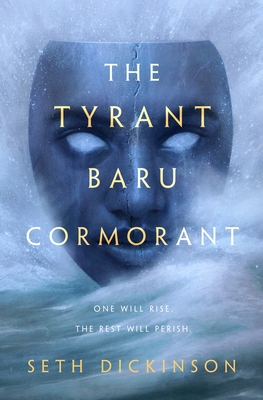 The hunt is over. After fifteen years of lies and sacrifice, Baru Cormorant has the power to destroy the Imperial Republic of Falcrest that she pretends to serve. The secret society called the Cancrioth is real, and Baru is among them.

But the Cancrioth’s weapon cannot distinguish the guilty from the innocent. If it escapes quarantine, the ancient hemorrhagic plague called the Kettling will kill hundreds of millions…not just in Falcrest, but all across the world. History will end in a black bloodstain.

Is that justice? Is this really what Tain Hu hoped for when she sacrificed herself?

Baru’s enemies close in from all sides. Baru’s own mind teeters on the edge of madness or shattering revelation. Now she must choose between genocidal revenge and a far more difficult path—a conspiracy of judges, kings, spies and immortals, puppeteering the world’s riches and two great wars in a gambit for the ultimate prize.

If Baru had absolute power over the Imperial Republic, she could force Falcrest to abandon its colonies and make right its crimes.

I recieved a copy of this book from the publisher. A huge thank you to Tor Books for providing an ARC. All thoughts are my own.

The Masquerade series holds a place on my shelves as one of my all-time favorite fantasy series. As such, The Tyrant Baru Cormorant was my most anticipated book of 2020. While the book goes a different direction than I expected and I’m not fully satisfied with the ending, I still very much enjoyed it and believe fans of the series will too.

The tone of Tyrant does a complete 180 from its predecessors. If Monster is  the lowest low, Tyrant is the manic high that follows. While I still wouldn’t call this book (or this series really) “happy”, the overall tone is certainly more upbeat. Baru has come to accept Tain Hu’s death and is now on a path for revenge against Falcrest, revenge to make Tain Hu’s death count. There’s a new flame of determination that drives Baru, giddy with excitement that a plan will work. This is the first time we really see Baru in control of a situation and it’s fascinating.

I was surprised by the humor in this book and it’s a humor I vibe with. It’s dry, sarcastic, sometimes meta in a way that cryptarchs would be, and often unexpected. Yet the jokes never felt out of place and served as a bit of tension relief in an otherwise tense scene. My favorite was a quick dig at pure mathematicians. Definitely saving that for future use. Likewise, there was an underlying sexual element that I didn’t notice in prior books. Maybe it’s because Baru needs to get laid without hating herself after. Maybe it’s because Aminata just needs to get laid period. Either way, there’s definitely an underlying element of horny.

Of the other characters, my surprise favorite turned out to be Xate Yawa. We get more from her perspective. Her conflicts over keeping her brother safe, her determination to free Aurdwynn from Falcrest, and her friendship with Heingyl Ri made her a surprisingly compelling character this time around. I’ve apparently either ignored age or it wasn’t really specified because I always assumed Yawa was way younger than she actually is. Also Tau is forty! Speaking of Tau, if Baru goes from depressed to determined With A Plan™, Tau goes from annoyingly cheerful to just full-on depression. I really have to give credit to Dickinson’s character development because Tau sans trim was one of the most fascinating, yet disturbing character flips I’ve read in a long time.

Going to take a quick interlude to throw in that my man Apparitor deserves so much better. Please give this poor man his husband, his boyfriend, a ship, and some fat stacks of cash and let him go exploring.

Readers who complained that Monster was too slow-paced and introspective will be happy to know that Tyrant has a much faster pacing, and is generally more action-driven. Similarly, those that complained that Baru didn’t use enough of her economic savant-ness should be happy to know that Baru flexes those skills here. In fact, one of my favorites parts of this book is how Dickinson addresses war as a means to expand trade, and the drive of trade and economics to those actions.

The worldbuilding in this series is part of what draws me to is and Tyrant is no exception. In particular, the cancer-worshipping Cancrioth are an absolutely fascinating group of people. I believe it’s best for the reader to learn about them on their own, so I won’t say more about them. We also finally get a dive into Falcresti society, and in particular I enjoyed seeing the minds of their averages citizens. I do wish we got to see more of the Stakhieczi, but with the direction this series is going, I suspect they’ll be a big player in book four. Having read this book, I still have absolutely no idea if magic actually exists in this world if or if it’s all a case of psychology and science so advanced it seems like magic.

As always, Tyrant delves into some heavy themes, and at a 250K wordcount, Dickinson has plenty of time to explore them. There’s a heavy exploration of colonialism, its motivation and effects. With Tyrant, the conversation turns to the aftermath: what happens ten, twenty years down the line, when a group of people and a place have been colonized. Baru, living off her childhood memories of Taranoke, slowly discovers how much she has forgotten of the culture she’s trying to save. Kyprananoke, a discarded Falcresti colony, exists in dying embers, its past self forgotten. On the flip side, Xate Yawa lives in the consequences of an Aurdwynn forged in Falcrests views and even the Oriati Mbo, yet unconquered, have been forced changes to accommodate Falcrest. Secondary are discussions of rebellions, and the people behind them, feminism in Falcresti society and its intersectionality with the treatment of minorities or lackthereof, and the exotification of other cultures in the eyes of colonizers.

My one dislike with Tyrant is that I didn’t like the ending. Not in a, ruined the series kind of way, but just, after the previous too, the ending felt way too easy. Too clean, one could say. It really can’t say more without giving things away, but the last fourth felt rushed.

Overall, I rate this book a 4/5. Loved the characters and this new flip on Baru’s POV, loved the worldbuilding and the tie-ins from previous books, and I was enthralled with the exploration of colonialism, rebellion against ones oppressors and those many facets. Fans of the series will not be disappointed

One thought on “The Tyrant Baru Cormorant by Seth Dickinson”