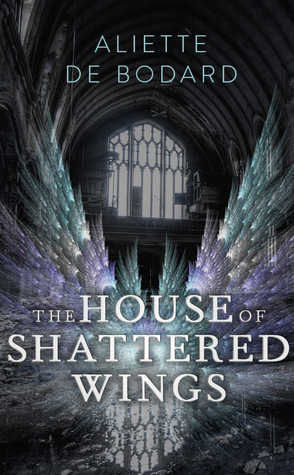 Paris has survived the Great Houses War – just. Its streets are lined with haunted ruins, Notre-Dame is a burnt-out shell, and the Seine runs black with ashes and rubble. Yet life continues among the wreckage. The citizens continue to live, love, fight and survive in their war-torn city, and The Great Houses still vie for dominion over the once grand capital.

House Silverspires, previously the leader of those power games, lies in disarray. Its magic is ailing; its founder, Morningstar, has been missing for decades; and now something from the shadows stalks its people inside their very own walls.

Within the House, three very different people must come together: a naive but powerful Fallen, a alchemist with a self-destructive addiction, and a resentful young man wielding spells from the Far East. They may be Silverspires’ salvation. They may be the architects of its last, irreversible fall…

After reading the absolute delight that was Of Dragons, Feasts, and Murders, I just had to pick up its parent novel, The House of Shattered Wings. While admittedly I wasn’t prepared for the grittiness and gore, I overall thoroughly enjoyed this first book of fallen angels and war-torn Paris.

Of Dragons, Feasts, and Murders was wholesome fluffy goodness, with the occasional ‘haha I’ll stab a bitch’ joke thrown in. The House of Shattered Wings, on contrast, is very much not fluffy or wholesome, and “haha I’ll stab a bitch” results in people actually getting stabbed. I remember reading reviews a long time ago warning about how dark these books get, but I still wasn’t fully prepared to read about a fallen angel’s broken body shattered upon the ground and two scavengers discussing which body parts to remove and subsequently sawing two fingers off. Veeeery different atmosphere.

After I got used to that grittiness, I found I really enjoyed the world that de Bodard has put together. Shattered Wings is set in approximately the equivalent of post-WWI Paris, where the remnants of great Houses of fallen angels and their dependents struggle for power amidst Paris’ ruins. The idea of fallen angels is hardly a new concept, but this world of powerful yet petty beings who’ve found themselves cast out of their homes, fighting to maintain their idea of stability while wrecking devastation on others, was so fascinating to me.

Despite the murder mystery premise, Shattered Wings is a largely character-driven, told from three main perspectives: Selene, head of House Silverspires and still living in the shadows of her looming mentor Morningstar, Phillipe, a broody Vietnamese ex-immortal, and Madeline, House Silverspire’s head alchemist and secretly a drug addict. Between those three and a myriad of side characters, you get to see a story unfold with perspectives on all sides.

Yet, although I enjoyed the narratives of each character, I found that I didn’t actually like any of them as people. The leads of this cast are generally scheming or/and emotionally distant, each with secrets to hide. And understandably so, since it’s clearly difficult to survive in this world without losing some morality along the way (looking at you Selene). And while that makes for interesting storytelling, it also means I didn’t really like any of them as people. Which, while not a bad thing, is certainly something interesting to note.

Asmodeus gets his own paragraph because let’s be honest, I picked this series up because I wanted more of him and Thuan. For those reading because they liked the novella, Thuan unfortunately doesn’t appear in this one. Furthermore, Asmodeus plays the role of a secondary villain, who’s recently been widowed. Which means that Asmodeus is one scary motherfucker. It’s implied in the novella that he’s pretty ruthless with squashing his enemies, but actually seeing his sadistic tendencies in action was something else entirely. Especially when reading from the point of view of his victim. Still, I admit I adore him as a character.

Overall, I rate this book a 4.5/5. Certainly not a fluffy read, and while the cast may not be the most likable, the characters come together to tell a fascinating story in the remnants of wartorn Paris.